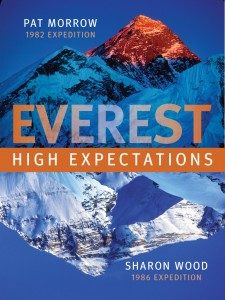 Our first multi-touch ebook for the iPad is Everest: High Expectations by Pat Morrow and Sharon Wood.

Link to Everest: High Expectations on iTunes here to download a FREE preview or purchase the book for use on your Apple iPad.

This richly illustrated adventure ebook (for the iPad only) tells the gripping story of two Canadian climbing expeditions that captured the attention of the mountaineering world in 1982 and 1986 – written by two climbers who reached Everest’s summit in distinctly different ways.

Only $9.99 for one of the best illustrated iBooks of the year. Available only on the Apple iPad. The iPad’s hi-res retina display brings the photographs alive.

Combining a powerful yet intimately told story with 150 colour photos, maps, archival video and audio recordings, “Everest: High Expectations” sets a new standard for illustrated books as it chronicles both Canadian expeditions’ quest to put a new route up the world’s highest peak. This is one of the world’s first major ebooks developed exclusively for the iPad, using Apple’s new iBook Author software.

In 1982, a team of Canada’s best climbers confidently trekked to Everest through Nepal’s post monsoon rains. Within a month, four people were dead and half the climbers had returned home. The much-diminished team salvaged the expedition by putting six climbers on the summit via the traditional South Col route but its mission was incomplete.

Four years later, a second team returned to make mountaineering history. Not only did the 1986 Canadian Everest Light Expedition establish a new route on Everest without Sherpa support, but it also put the first North American woman on top. Despite several subsequent attempts, that route (via Tibet) has never been repeated.

Packed with 50,000 words, 140 hi-resolution photographs, slide shows, archival video and audio clips, maps and resources, all in 142 pages. The Apple iPad brings them to life. Find your link to the book on iTunes here.

This book, co-written by international adventure photojournalist Pat Morrow and alpine guide Sharon Wood, provides a fascinating insiders’ look at an era when climbing with style was more important than “peak bagging” and Everest was only approached after a long mountain-climbing apprenticeship.

“High Expectations” delivers classic high-altitude drama – a near miss in a massive avalanche, speedy alpine-style ascents from the South Col to summit, a risky nighttime descent of the Hornbein Couloir, a fiery gas explosion in a tent and weeks battling jet stream winds in an atmosphere starved of oxygen.

Optimized for Apple’s high definition retina display on its new generation of iPads.

Both authors make candid observations on how their lives were affected by the Everest experience and offer frank assessments of the change in attitude today toward Everest and climbing standards.

This multimedia Everest book marks the 30th anniversary of Morrow’s summit. It is truly a classic.

(Follow this link to buy “Everest: High Expectations” for your iPad on iTunes – or preview it for FREE.)

Read Sharon and Pat’s assessment of their climbs in this 2012 interview in The Globe and Mail here. They talk about how different things have become now that commercial expeditions have access to Everest and inexperienced, untrained adventure tourists can buy their way onto the peak.