SHERPA: The Memoir Of Ang Tharkay

Just before we left for Nepal, Bill Buxton thrust a freshly printed copy of SHERPA: The Memoir Of Ang Tharkay into my hands. This critically important tome is the autobiography of Ang Tharkay which has long been a collector’s item in the original French-language edition but has never been available in English. Ang Tharkay was born in Khunde village in 1908, and became one of the most renowned Sherpas of early Himalayan exploration, next to his friend and colleague Tenzing Norgay.

Kudos to Bill for pushing The Mountaineers Press to bring out this English edition. Driven by his passion for historic Himalayan climbing literature (he’s got an original edition of almost every climbing or exploration book on the Himmies that came out prior to 1954), he partnered with Bob A. Schelfhout Aubertijn to beef up the original endnotes. Ang Tharkay’s nephew Tashi Sherpa, and son Dawa Sherpa penned a preface and afterword which offer insight from their unique perspectives as “modern” day Sherpas.

Inspired in part by the book, Baiba, Trekking Guide Sonam Sherpa and I set out to reverse part of the hiking route that Ang Tharkay took to get from the Khumbu to Darjeeling in order to apply for work on one of 8 British expeditions to Everest beginning in the 1920s. Considering the distances covered, and the tortuous nature of the terrain, we were awed by the amount of drive it must have taken for all the penniless Sherpas who underwent extreme deprivation just to walk to where the Brits were hiring in those bygone days.

The chapter on Ang Tharkay’s role as sirdar on the first ascent of Annapurna is particularly engrossing, culminating in the epic recounting of the 5′ high powerhouse carrying frostbitten French climbers all the way from the high altitude “death” zone back to the roadhead.

While on the trail we managed to track down some Khumbu elders who were youngsters when they joined Ang Tharkay on some of his last expeditions, and we also kept our eyes open for traditions and landscapes that remain intact to this day. 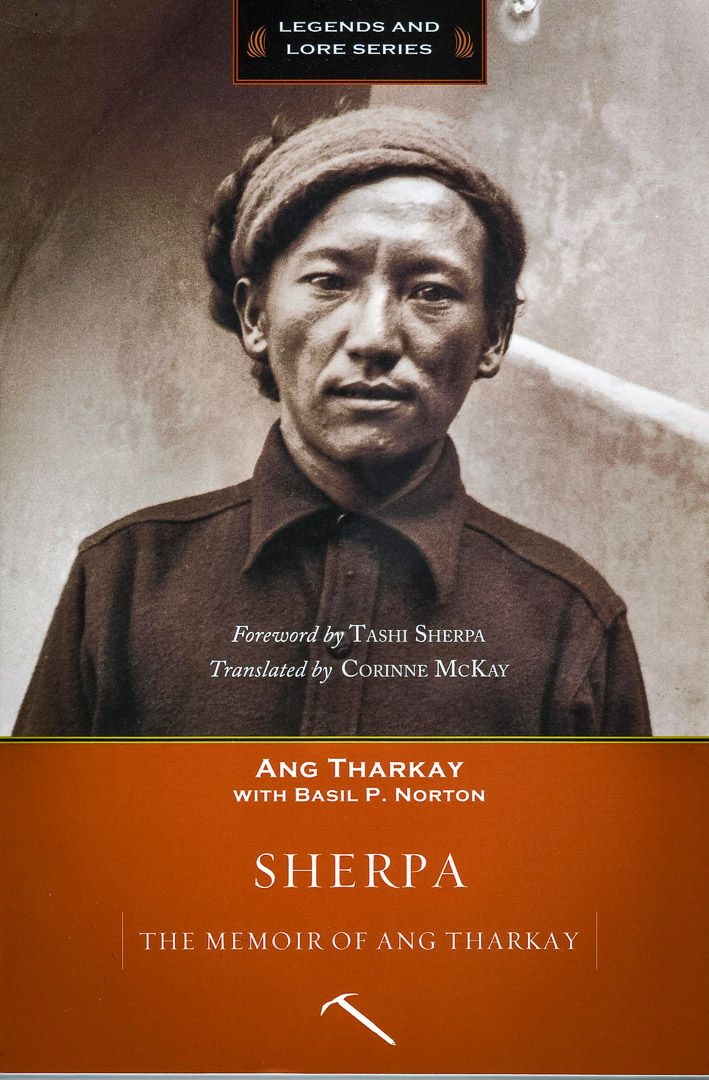 Book cover for Sherpa: The Memoir of Ang Tharkay. It's important to note that there are only a literal handful of books written from the point of view of indigenous peoples who have played significant roles in historic mountaineering exploration. To see book, go to: www.mountaineersbooks.org/Sherpa-P1684.aspx