As part of its 2006 centennial celebrations, The Alpine Club of Canada invited two dozen climbers and artists, who share a similar vision of the mountains, to collaborate on a work of art.

Having been on four climbing/ski expeditions and three river journeys in the St. Elias Range in Yukon, Pat picked the region as his favourite part of the Canadian cordillera. Fortuitously, he was paired up with artist Dominik Modlinski, www.paintingjourneys.com who maintains a summer residence in Atlin, in the northern Coast Range of British Columbia. Dominik has hiked and painted extensively in Kluane National Park, and the St Elias mountains.

The two compared notes to find a location that they had both been to, and fallen in love with, and settled on the world-class view of the Kaskawulsh Glacier from atop Observation Peak. “What each of us find most striking about this view is that it lies at the vegetated interface of the front ranges and the largest ice fields outside the polar regions”, says Pat.

Dominik’s painting will be part of the exhibit opening October 13, 2006 at the Whyte Museum in Banff, entitled “The Mountaineer and the Artist: Reflection on a Mountain Place”. 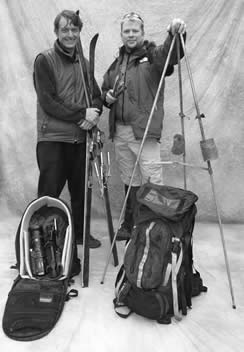 Pat & Dominik, with their tools of trade. Photo © Craig Richards