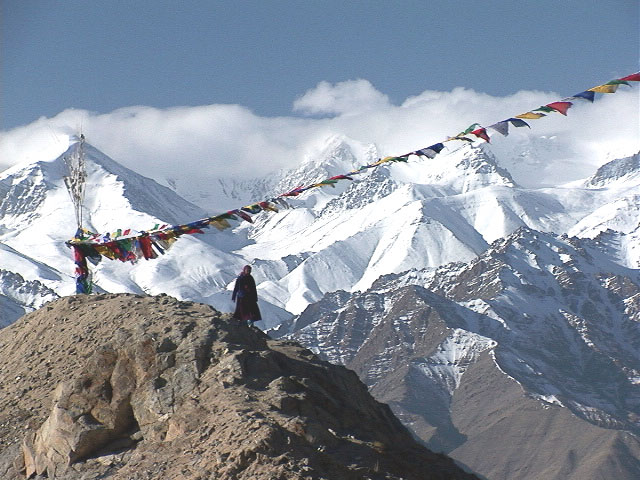 a 50-minute documentary
to see a 3 min trailer, click here.

To buy a DVD for home viewing, CONTACT US
$30
(includes postage & handling)
Note: this film is protected by public performance copyright, so please contact us for different pricing to use the film in a teaching or classroom situtation.

Magic means different things to different people. For Cynthia Hunt, the founder of HEALTH Inc (Health, Environment, And Literacy in The Himalayas), it’s all about the empowerment of women, good health and nutrition. But these are not easy propositions in Ladakh – one of the highest and driest inhabited places on earth. Yet Cynthia is in her element as she routinely hikes through the rugged mountains of northwest India to help foster change in isolated communities. As a passionate artist, book publisher and educator with a decidedly idiosyncratic style, she helps the illiterate village women in their efforts to form a cooperative. The pay-off comes when they undertake a perilous, four-day journey down a frozen river canyon to petition government officials in the distant capital city for funds to build green houses.

It is mid-winter in the oxygen-starved landscape of Ladakh as Cynthia Hunt embarks on a journey unlike any other. In order to reach the remote village of Lingshed, she must trek for four days following an ancient route called the Chador.Â  This icy conduit on the frozen Zanskar River passes through a gorge deeper than the Grand Canyon, bordered by snow clad 6,000-meter peaks.

Chances of a plunge into the steel blue, fast flowing river are considerable. Yet Cynthia is undeterred. This grueling and unconventional commute to work is part of the job, and she loves it.

This 49-year old American woman, dressed in the traditional shalwar khameez with an incongruous and tattered Montreal Canadiens baseball cap pulled down over long braids, is no stranger to these parts. She has lived and worked in this isolated region of India for 15 years. Her singular devotion to help Ladakhis face the integrative challenges of a modern world approaches missionary zeal.

We follow Cynthia, accompanied by her two Ladakhi interns, as she hikes over a series of 5000-meter passes to reach the remote villages where government agencies and NGOs rarely go. This is where help is needed the most – where infant mortality rates are up to twice the Indian average and where womens’ illiteracy is 97-100%. Through grass roots projects such as solar schools, greenhouses, women’s cooperatives and books that she draws and publishes herself, Cynthia attempts to make a difference.

But it’s not easy – especially being a book publisher in Ladakh. Plagued by constant power outages and sub-zero winter temperatures, she works doggedly into the nights in her unheated tiny office-cum-bedroom in the rustic capital of Leh.

Her latest book, Padma and the Magic Mountain, espouses the benefits of a magical mountain composed of local nutritious foods. The message is unequivocal. “If kids have empty stomachs, how can they concentrate and learn in school?” asks Cynthia.

As Cynthia climbs the steep trail from the frozen Zanskar up to Lingshed, she carries in her backpack a copy of Padma and the Magic Mountain. Not content to merely deliver the book to the school, she invents a rollicking drama in the primitive classroom.

Whether instructing monks in the local monastery on the basics of dental hygiene with a lively lesson on the use of tooth brushes, or acting out the antics of Padma, Cynthia’s delivery is nothing less than dramatic – and often hilarious.

Besides the school kids, the women of Lingshed are also inspired by Cynthia’s efforts. Their feisty ring leader is Rinchen Dolma, a toothless and illiterate 56-year old grandmother. With Cynthia’s voluble endorsement, the village women want to establish a cooperative so they can generate their own source of income. By constructing simple solar greenhouses they can grow vegetables to boost the nutrition and health of their children.

The culmination of the film comes when Cynthia returns to Leh with a gaggle of boisterous village women, including Rinchen Dolma and two Buddhist nuns. The conditions on the Chador have deteriorated, and the group faces considerable risk. They must wade through shin-deep frigid water that has flooded over the ice, and in some places, they climb up on the cliff sides to skirt the open sections of water. But the excitement of travelling to the capital city supercedes their fear.

In total, 30 women from four different villages meet up in Leh and, under Cynthia’s wing, learn to negotiate the urban maze. In spite of the stigma of being illiterate village women, their self-confidence grows over a 10-day period of workshops and government meetings. They learn the ropes of creating small businesses and building a solar greenhouse. Their joy is palpable as their celebrate their success with dancing and singing with Cynthia in their midst. In spite of this, two of the villages end up with very different results.

Project Status:
Following the film’s success at the 2005 Banff Mountain Film Festival, we are looking for a broadcaster who shares our vision, and will bring this to story to a broader public audience. 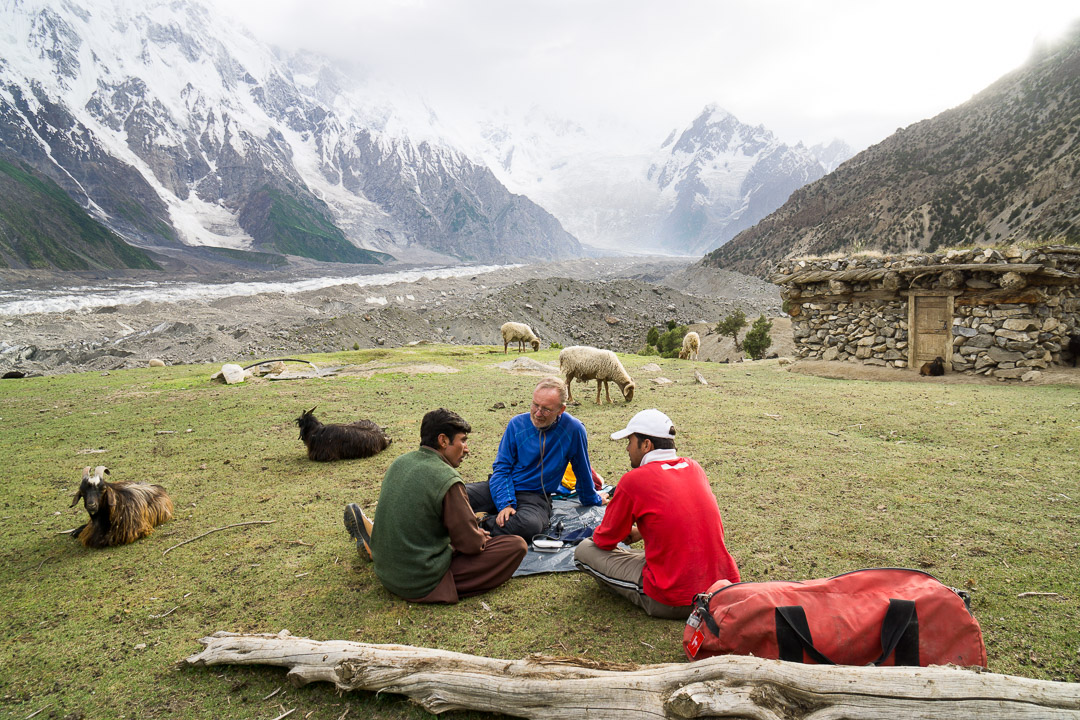 Medicine on the Roof of the World, the 5 min promo video that Pat shot for Bill Hanlon/Basic Health International last year in the Karakorum range has been posted on his site.

While on the site, take a look through some of Bill’s work with remote communities in other mountain ranges and consider tossing some coin his way to help improve the quality of health care for our fellow mountain dwellers. He’s currently (Sept/2015) back in Afghanistan and the Hunza Valley following up on last year’s programs. The upper Hunza got hit hard a couple weeks ago by torrential monsoon rains and some of the trails and roads that you’ll see in the video have been washed away. Knowing Bill, he’s probably set aside his stethoscope to join the shovel brigade. 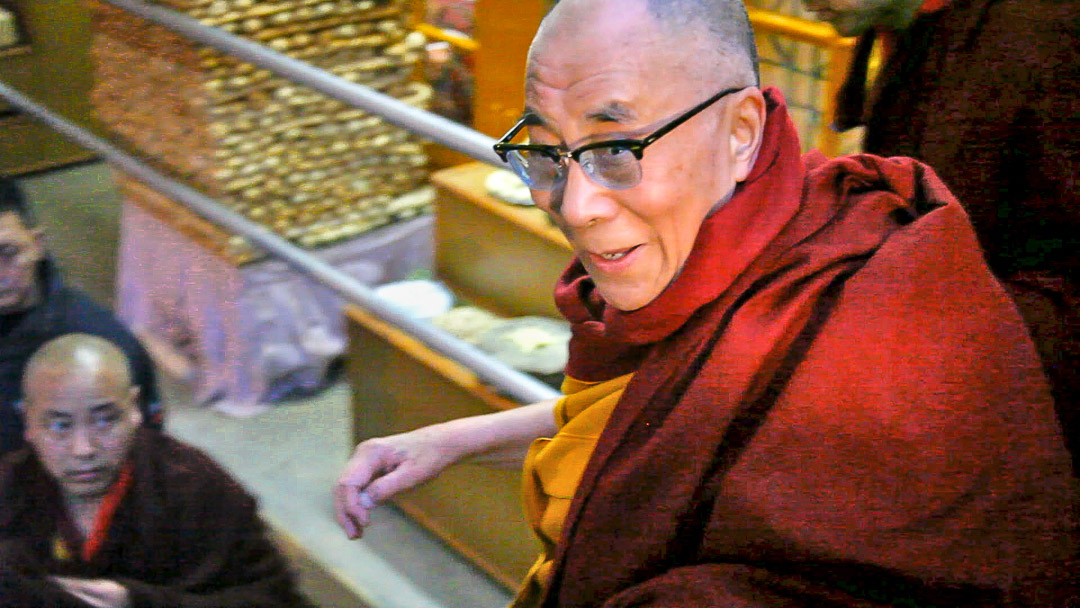 – February DOP and producer (Pat & Baiba) of an info doc, 1000 Tibetans, for Project Tibet Society, an offshoot of the Canada Tibet Committee. Nima Dorjee, who is the host in the film, presented it at the 6th World Parliamentarian’s Convention on Tibet, April 23 in Ottawa. He wrote, “Just played it in front of 7000 people! People loved it”! 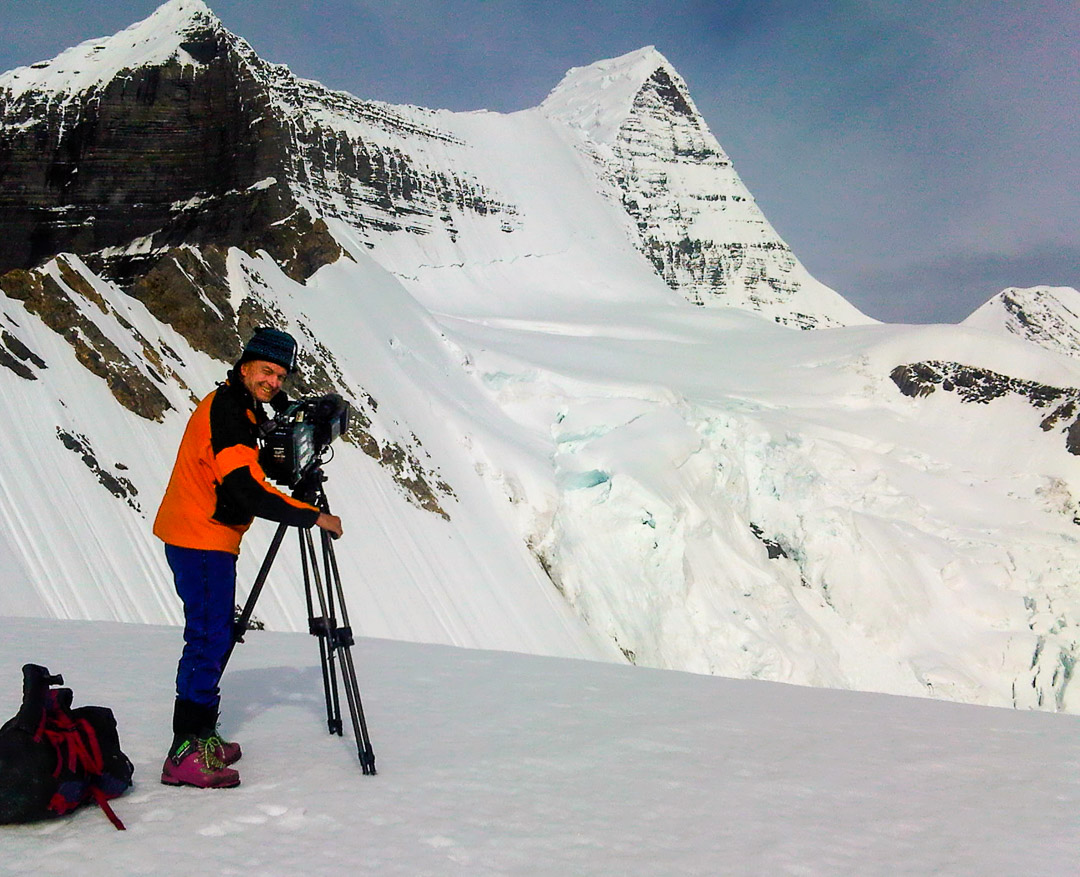 – Sept. DOP on a film, Cowboys and Carnivores, for Alberta Ecotrust, in the foothills of the Rockies near Waterton National Park.

– August. camera operator filming extreme telephoto and aerials of climbers on Mt Robson and Edith Cavell in the Canadian Rockies, for a series called Great Summits of the World, for NHK (Japan Broadcasting Corporation)

– July DOP on an exceedingly short promo film shot in the Purcell mountains for Kicking Horse Coffee, to be used for the Banff Mountain Film Festival’s world tour. 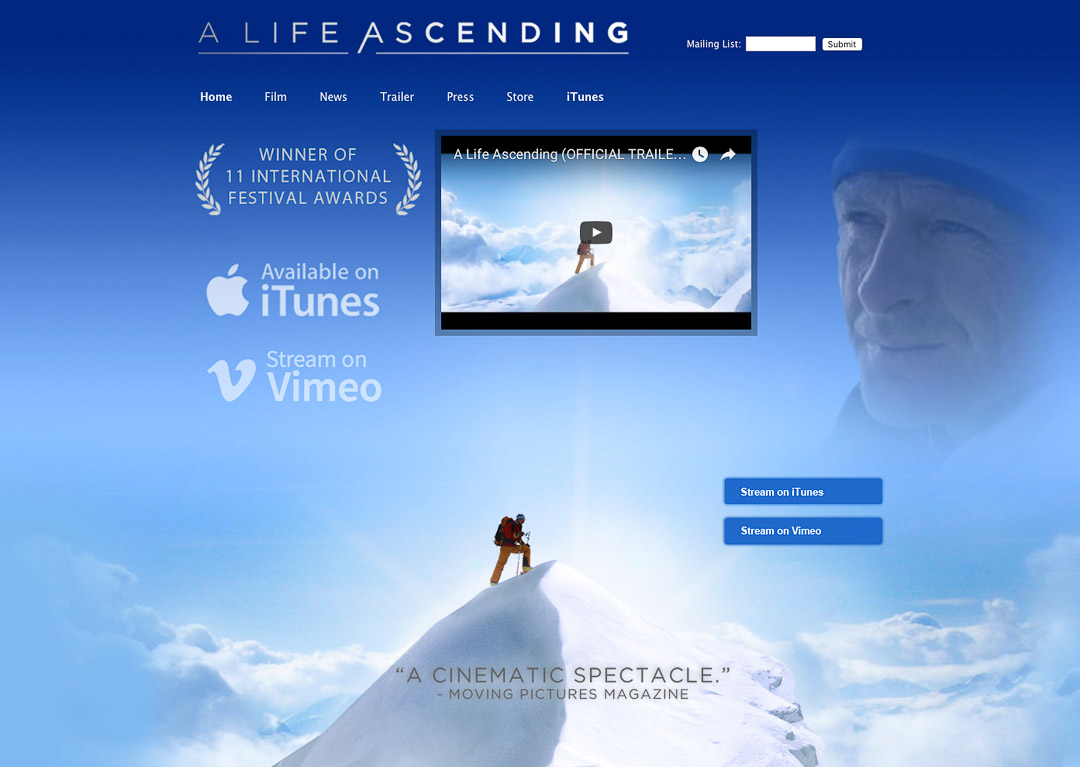 – film release – camera operator on award-winning documentary A Life Ascending shot in Selkirk Mountains of British Columbia over the winters of 2007 and 2008, about the professional and family life of ski and mountain guide Ruedi Beglinger, for producer Stephen Grynberg, Los Angeles. This film won three, count ’em, three awards at the 2010 Banff Mountain Film Festival and has scooped awards at four other festivals this year. 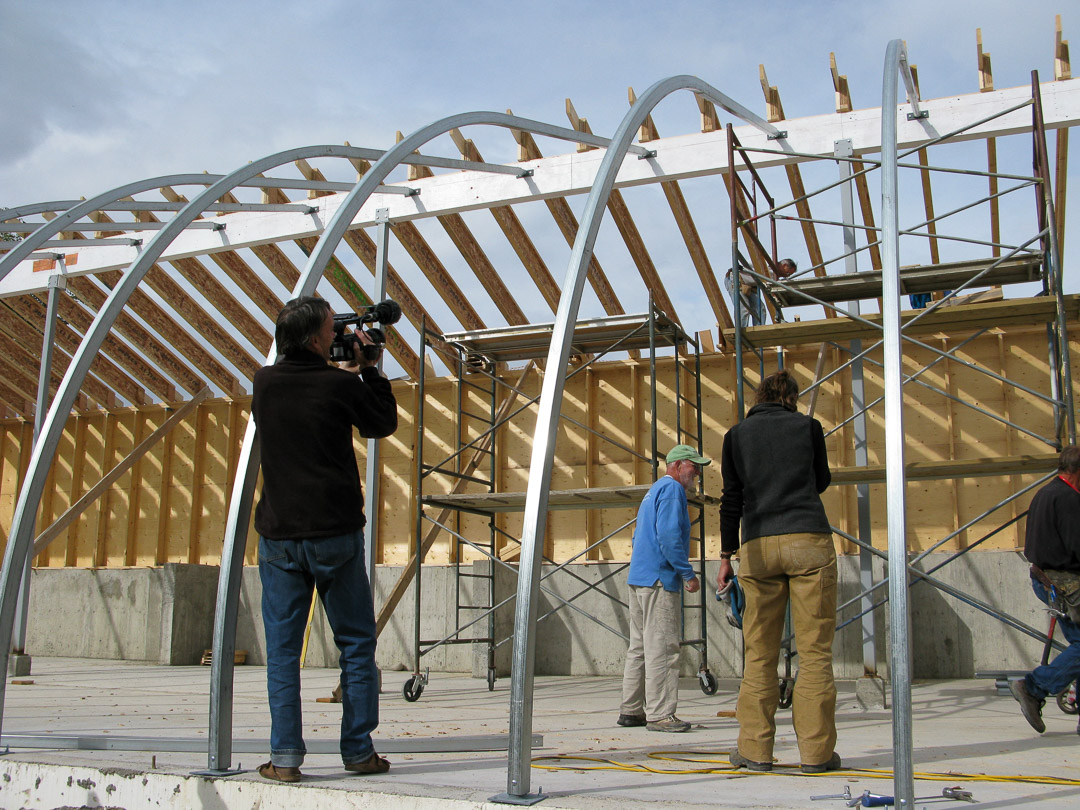 – DOP (HDV), a short film on the construction and implementaion of the high tech Invermere Community Greenhouse for the Columbia Valley Botanical Gardens and Center for Sustainable Living, Invermere, BC. 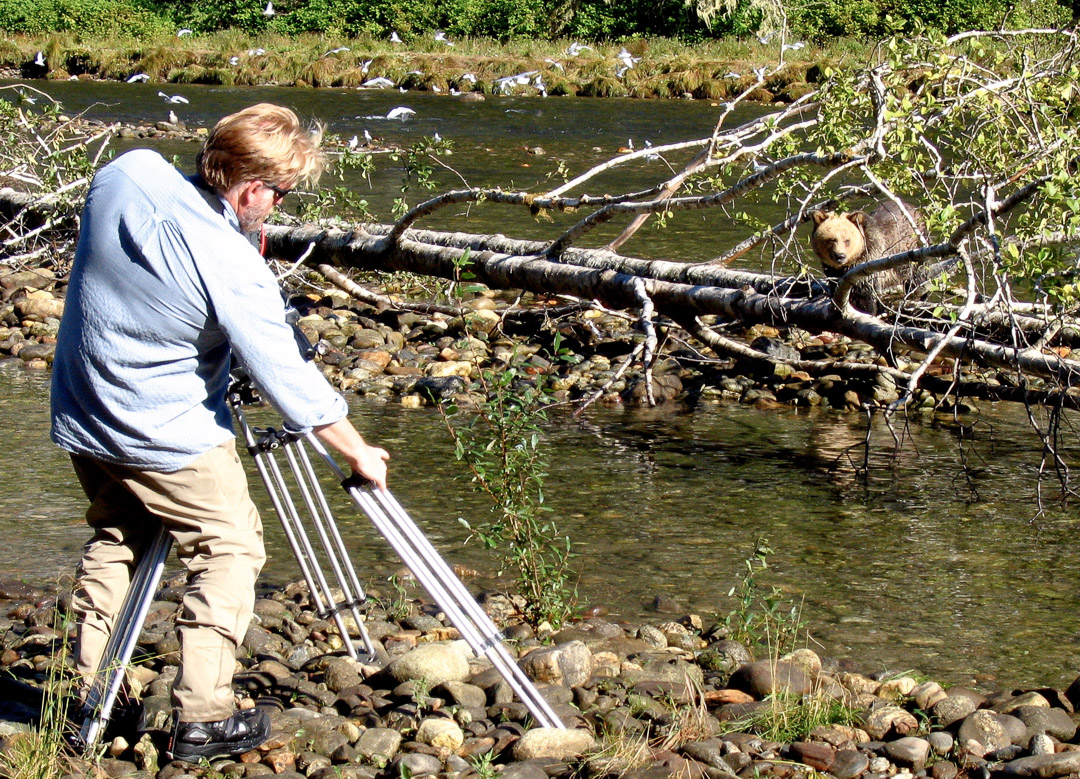 April camera operator on “The Sweetest Embrace”, shooting pickup scenes in Canadian Rockies, and interviews in Calgary for an NFB documentary about lost boys of Afghanistan. 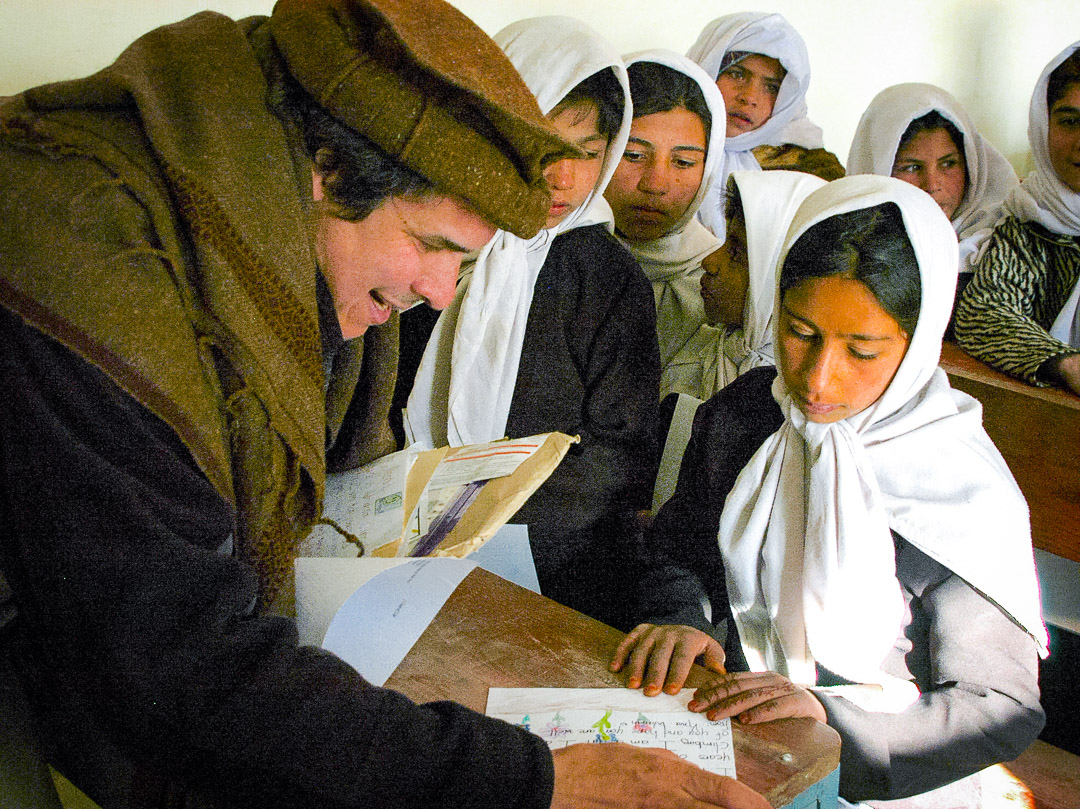 – Dec dop, producer, writer, sound for two promo films, Pennies For Peace, and One School At A Time, about mountaineer Greg Mortenson’s NGO, Central Asia Institute’s efforts to bring education to the children of the Karakorum and Hindu Kush. Shot on location in Baltistan and Afghanistan.

– Feb/March  production manager (Baiba) on documentary about the Canadian Rockies, shot for German public television. Camera operator, (Pat) on 3 segments for that film. 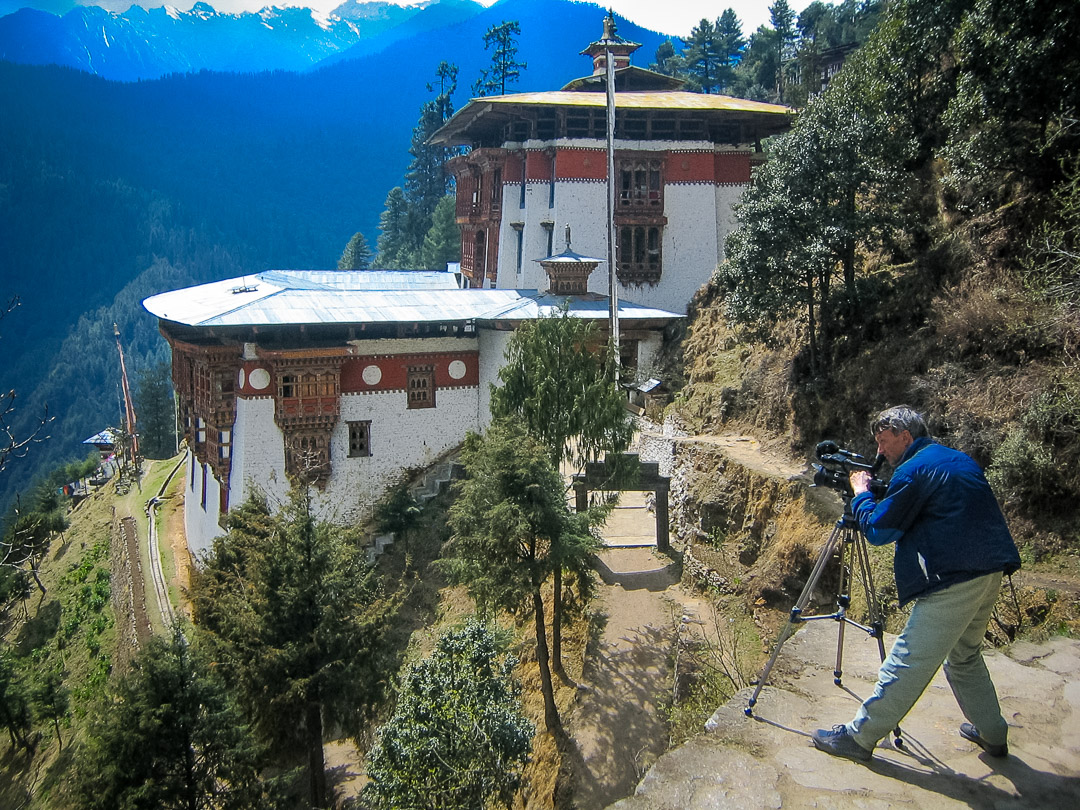 – The Magic Mountain Winner, People’s Choice Award at 2005 Banff Mountain Film Festival. The breakneck life of artist and educator Cynthia Hunt as she helps to foster change in the remote Himalayan region of Ladakh, in India. 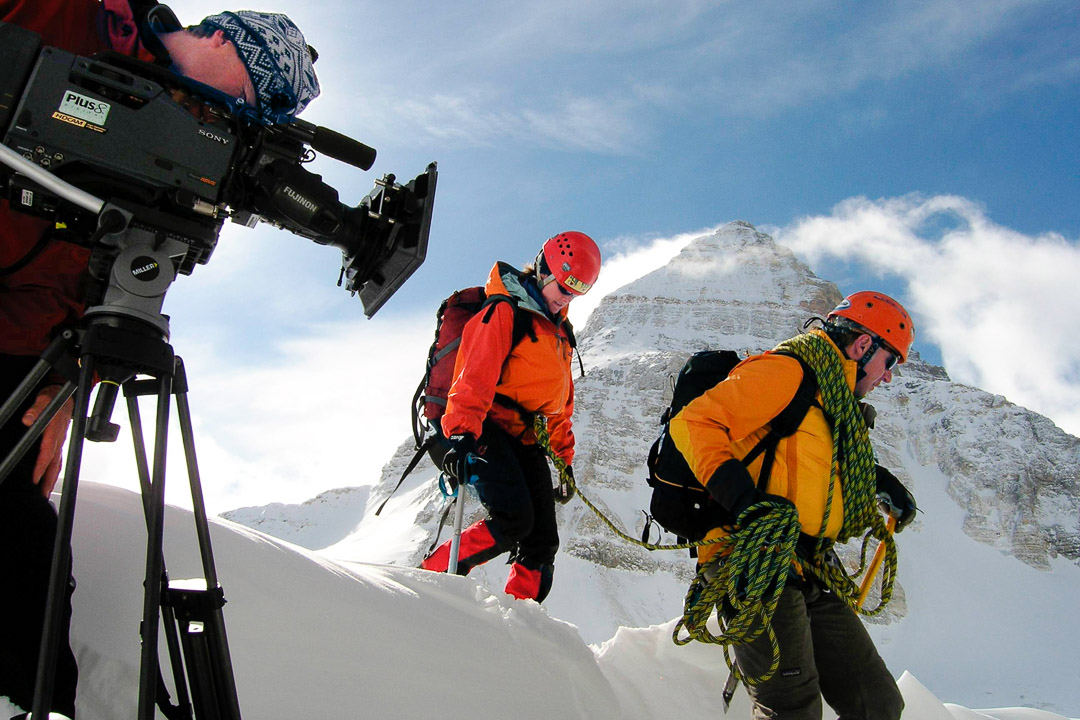 – April camera operator (Pat), shot several Hi Def sequences for the 4-hr documentary series, The Shining Mountains, about the Rocky Mountains for National Geographic and History Channel, working with producer/DOP Guy Clarkson. PatÂ shot the climbing sequence at the end of this post, on Mt Assiniboine in winter conditions. 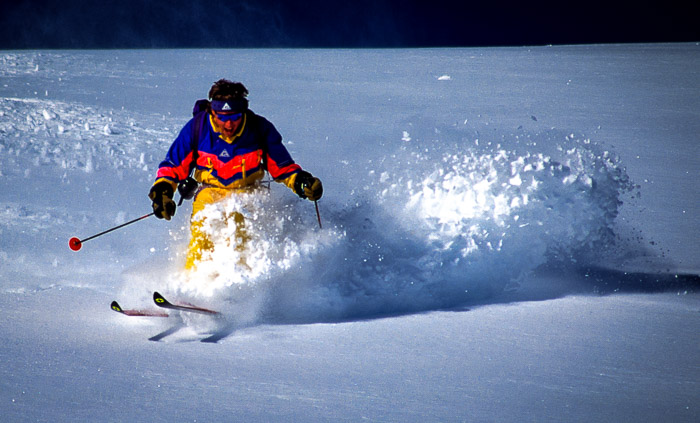 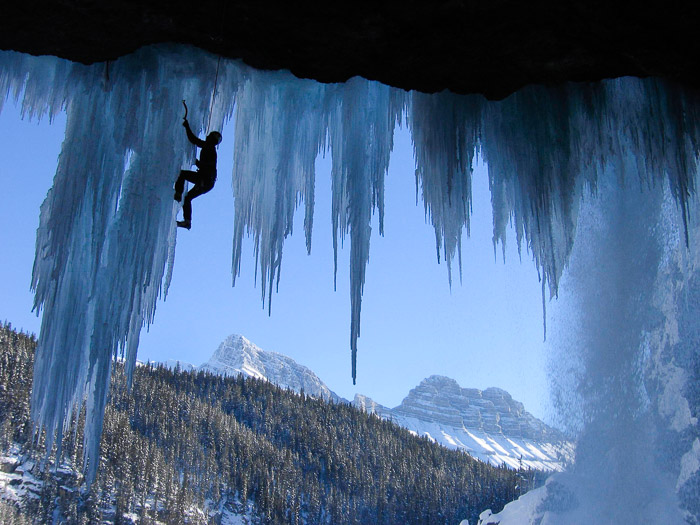 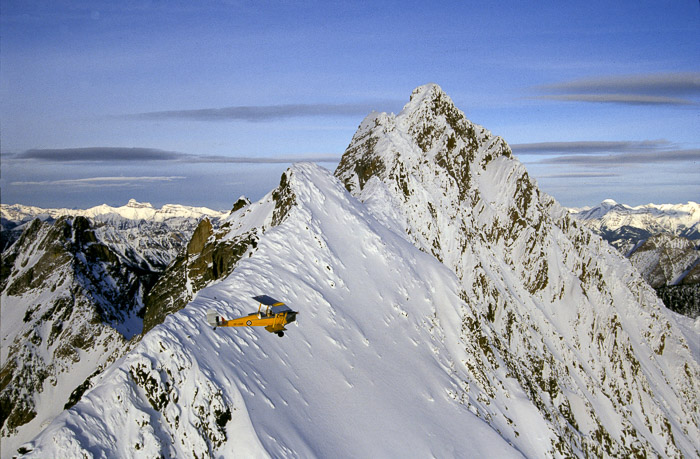 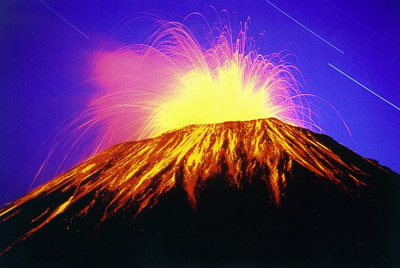 – Aug/Sept – DOP (Pat) and sound operator (Baiba), DV, for National Geographic Explorer. Beyond the Lava follows a German photographer and adventurer in the active volcanoes of Russia’s Kamchatka Peninsula. 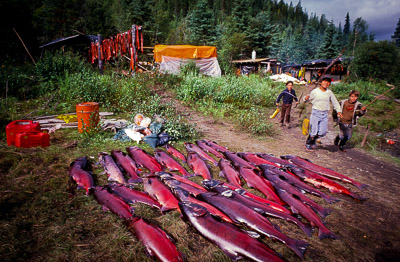 – Sept – DOP, 2nd unit (DV) on Heavenâ€™s Pass, a film about the Kaska Indians in the northern Rockies of British Columbia. 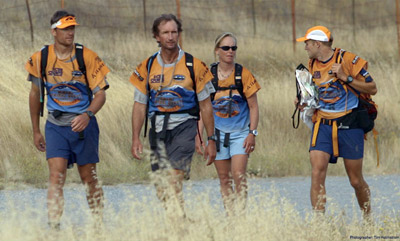 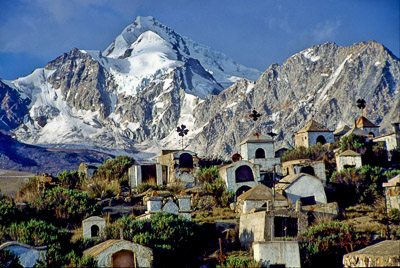 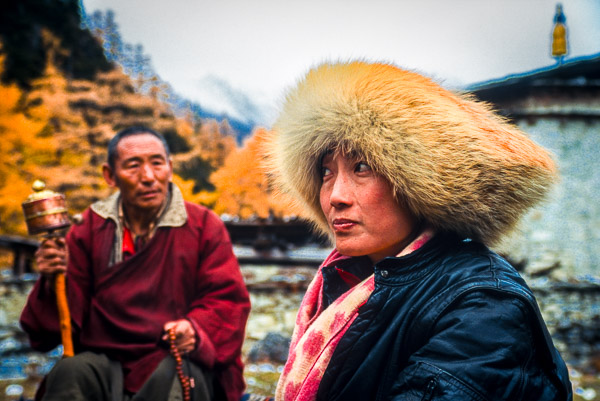 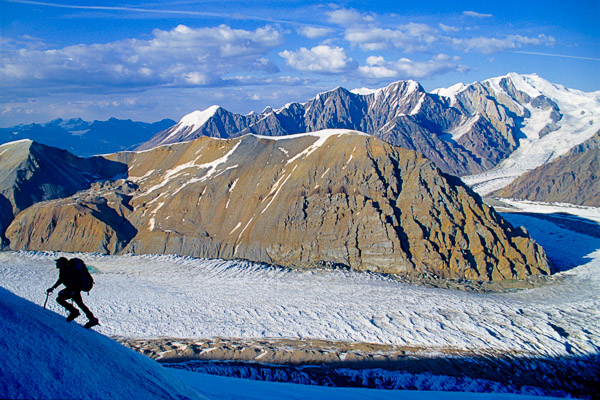 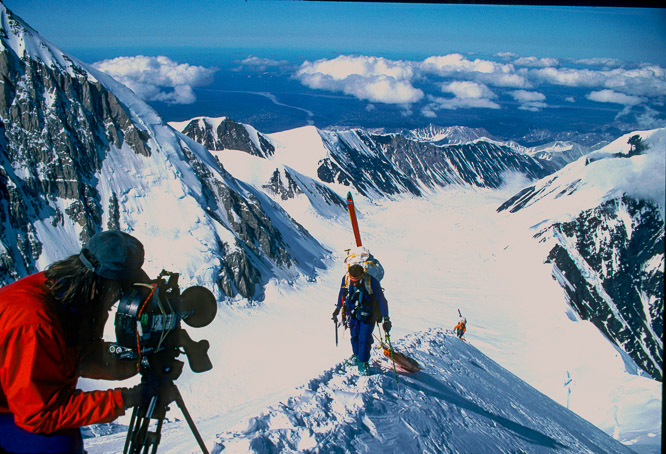 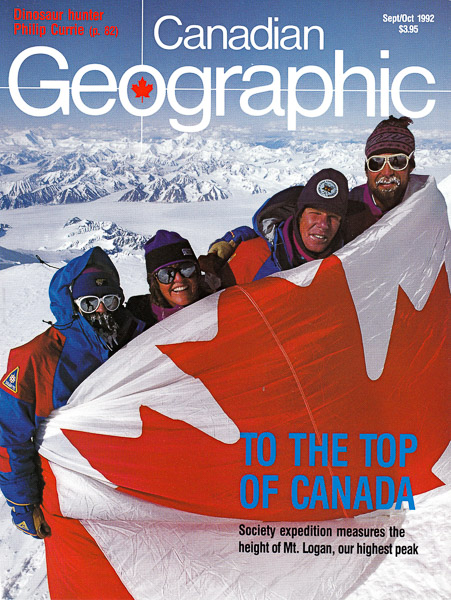 – May /June – DOP (Pat), Hi8, 30-min doc, The Measure of a Mountain, shot on for the Royal Canadian Geographical Society and TV Ontario. An expedition of scientists re-measure the altitude of Canada’s highest peak, Mt. Logan (5959 m). 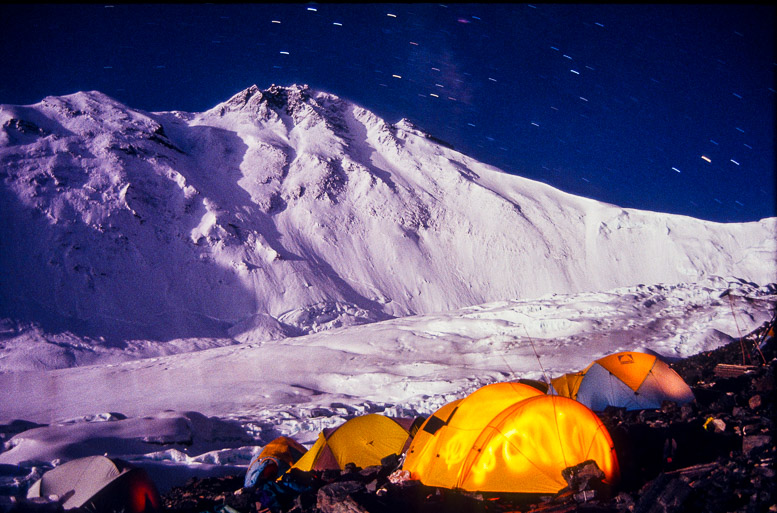