The Great Adventure of Moving!

After celebrating our 20th year of living and playing in the Alberta Rockies, alas, Canmore is no longer the sleepy, idyllic mountain town that we moved to in 1987.

Edged out by the Calgreedian invasion as well as a swelling local population, we bought a small house with a great view in the village of Wilmer, (140 houses, give or take). It’s a two hours’ drive west of Canmore, and a half hour bike ride north of Invermere (where Pat was born), on the flanks of the Purcell Mountain Range.

In the spring and autumn, it’s hard to sleep in past 6 a.m., due to the clamour of avian pilgrims flying over the Columbia River Wetlands. Ironman fur trader/map maker David Thompson established Kootenae House trading post just a couple kms from Wilmer in 1807, and prolific Austrian guide Conrad Kain (first ascents of Bugaboo Spire, Mt Robson, etc) built his home on the western edge of town in 1920.

While we will deeply miss the spectacular limestone crags and our dear friends in the Bow Valley, we look forward to reacquainting ourselves with the Purcells and our old friends in the East Kootenay and Columbia Valley. And we harbour the vain hope that the industrial tourism sprawl of “Canmore West” (Invermere) won’t destroy the collective integrity of its satellite hamlets. 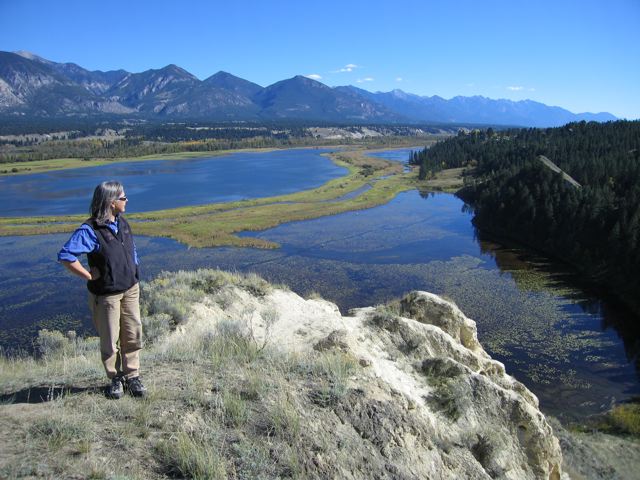 Baiba looks back at Wilmer (on point of forested bench) - no sign of condos...yet. © Pat Morrow