Our journey to Bhutan and Nepal provided a wonderful opportunity to visit old friends, and research a couple of new film projects.

In Bhutan, we were graciously hosted by Barba Tulku Rimpoche and his wife Sangay Tshoki at their warm and accommodating Nor-thrung Guesthouse. During the three weeks of our stay with them in Thimpu, our hosts kindly took us on excursions to stunning sacred locations such as Taktsang Monastery (Tiger’s Nest) near Paro, where Guru Rimpoche meditated in what has become one of the most famous monastery sites in all of the Himalaya.

We also began research on a film about the uniquely Bhutanese Buddhist Middle Path approach to coexistence with the Himalayan Black Bear. In other parts of the world, when there is a human-bear conflict, the bear almost always loses.

In Nepal, we rendezvoused with fellow Canadian climber, Laurie Skreslet, fresh off a filming expedition with Banff DOP Guy Clarkson on the west ridge route of Everest, first climbed by Canadians in 1986. A film crew, Nomad Films from Toronto, recorded our “walk down memory lane”, as we trekked to Everest base camp together. We spent just 12 days on the round trip, in some ways the least satisfactory trek we’ve ever done.

One of the positive aspects of the experience was that we were lucky to have our friend Ang Nima along to work with us, and also Lhakpa Tshering’s widow, Nim Phutti joined us on the walk to Thame where we filmed this year’s Mani Rimdu celebrations.

In Kathmandu, we visited her boys, Ang Tshering (left) and Sonam Tashi who are attending a boarding school there for at least two more years. A group of around half a dozen Canadian “Friends of Lhakpa Tshering” have established a fund for the family that will continue to pay out for the next 8 or 9 years, until the boys are old enough to provide for their mother and auntie in Kunde. We’re happy to report that the boys are doing well in school, and their mother has been picking up work as a dzopkio driver with treks run by Canmore guide, Wally Berg. 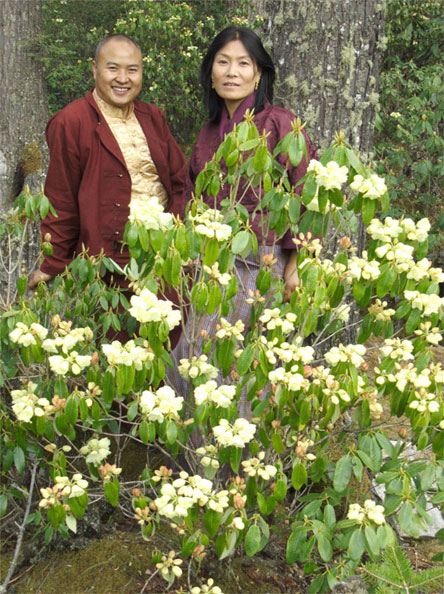